The theme of the night was “Celebrating Excellence”, a setting that was most fitting for the tourism stars of Belize, which depicts the diversity of Belize’s tourism product.

This year’s winners are as follows: 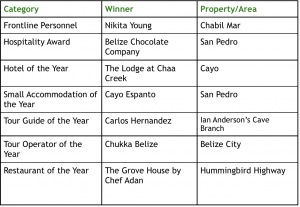 The BTB would like to congratulate all the winners of the 16th National Tourism Awards as well as all nominees for the excellent work throughout the year!